Where is WoW installed?

Where is World of Warcraft installed on my computer?

If you are only playing a single version of the game and have not installed the other version via the Blizzard Launcher, then you may only have a _retail_ or a _classic_ folder dependending on which version you are playing.

If for some reason your World of Warcraft is not installed in the default location, there a few simple steps you can follow to find the installation path easily.

How to find the World of Warcraft installation path

Most World of Warcraft players on Windows will have an icon on their desktop that will look something like the image below.

From here it is easy to use the World of Warcraft shortcut on your desktop to find the games installation path. 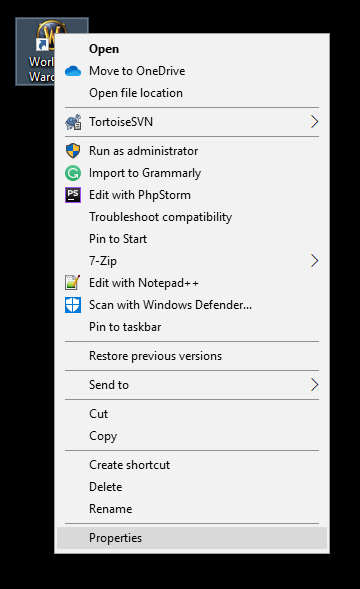 Once the properties window opens you will want to look for the field labeled "Start in:", as depicted below. The text in this field represents where on your computer World of Warcraft is installed. 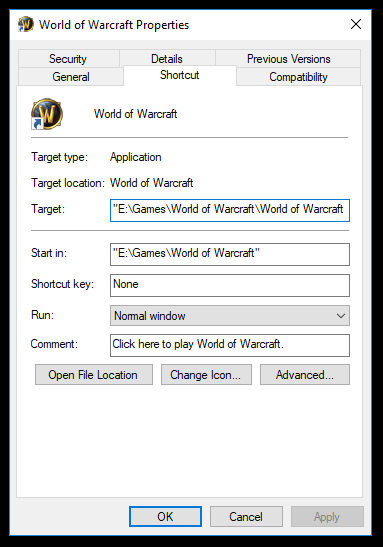 Hopefully this guide was useful to you, and helped you find the installation path for World of Warcraft on your computer. If so, we would love for you to leave us a reply and let us know :).

laukera
Gj posting this thread for people who dont know. I just now created an account on solidice to help in the forums and this is one of the things I was gonna help with. The new fix 1.8.3c works perfectly for me as I just dl and added it to addons and logged on. Full queues for me! If anyone has questions feel free to ask.
04/19/14

rbubbaray
Also I get asked alot from members of guild how to actually install addons .. w/o using a client .. I would like to share how I do it ..
I have been able to do this for most windows OS ..lets use solidice and OQ for example .

Hit download ..If you left the download defaulted { destination folder} to download folder ..simply open the download folder . you then should see the addon you just downloaded in that folder {oque with that version} now right click the addon as it is compressed .Now pick the option extract all..extract all inside the download folder .. it should now open a window containing the extracted unzipped folder of the addon . now just copy that folder that is unzipped .. proceeed to the tutor Ron has posted above to find the interface addon wow folder ...now in the list you can either delete the old Oque from that list of addons and then paste the new version in that list or let it override the older version if you did not delete it .now close all those folders and close the wow folders { while doing all this make sure the game is shut down } you can reboot but it isnt needed for most addons seeing they are not a exe file for your system .. open the game and check the addon list to see if the addon now shows .. goodluck
05/08/14

So I have been trying to install Oqueue, and have followed the above information to make sure it is in the correct folder. I am positive it is the correct WoW folder and such, and I have also followed the youtube videos. When I log in, it still wont show up in my AddOns tab in game. Please please help!

Ron
Do you run your WoW from the Battle.net app or the WoW icon. If you use the app, it could be in a seperate location as the app and the icon don't necesarily point to the same place. If you run the app, look in the app settings for the correct location.
05/22/14

i cant load the pictures is there a other way to do it?

The links wheres broken. I have replaced them with working links.
08/09/14

From an update when we went to the Battle-net destop addon, My World of Warcraft folder was moved. The new location for my game is Computer/C: Program Files (x86)/ World of Warcraft (then /Interface/Addons if I am manually cut/pasting an update as I do not use any Clients to do auto-updates). The old location was under Computer/C:/ Users/ Public/ Games/ World of Warcraft (and then /Interface/ Addons). If you use Windows, check both locations. The new Battle-net desktop app runs it from Program Files x86. I was updating addons under the Users location and scratching my head as to why none of my addons updates were in there. All of my data was copied into the Program Files x86 folder, but the old location was not deleted. When running WoW I was seeing the old addons copied into the Program Files x86 folder during the update, and it was not noticing or copying the stuff I was putting in the old Users folder. Also, R clicking the desktop folder and viewing its location, as shown above, was not working for me since I was using an old shortcut to the Users version.

PrincessZebby rofl wtf u talking :D? nothing can be changed without ur wish ... u installing wow once and that location cant changed himself lol

Confirm Action
Test
Are you sure you want to perform this action?